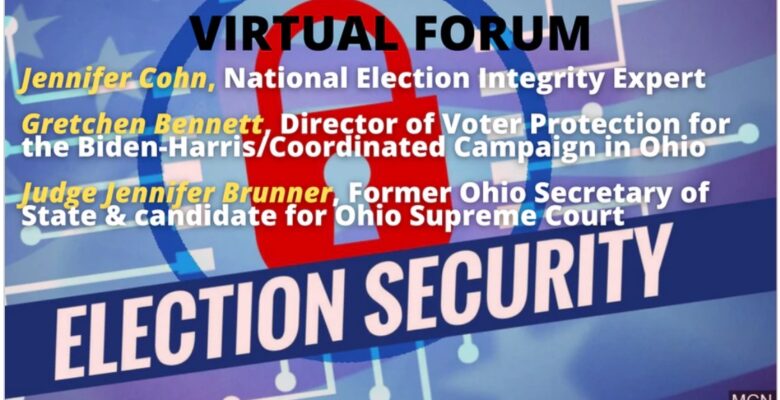 Jennifer Cohn is an attorney turned election security advocate, writer, and freelance journalist whose election-integrity articles have appeared in the New York Review of Books, Who What Why, TYT Investigates, The Brad Blog, and Salon. Since the 2016 election she has focused her professional efforts exclusively on investigating and exposing our country’s insecure computerized elections. A compilation of her written work and interviews can be found at (https://www.ProtectOurVotes.com). She posts daily about election security via her twitter account, @jennycohn1, which has over 140k followers. Jennifer is a graduate of UCLA and Hastings College of the Law.

Judge Jennifer Brunner is a candidate for the Ohio Supreme Court in 2020 who currently serves as one of 8 elected judges of the Ohio Tenth District Court of Appeals in Columbus. Judge Brunner served as a Franklin County Common Pleas judge from 2000-2005 and Ohio Secretary of State from 2007-2011. As Secretary of State, Judge Brunner was actively involved in election security and investigating and reforming the systemic flaws in Ohio’s voting processes made evident in the 2004 election. During her tenure, Judge Brunner defended and advanced Ohioans’ voting rights in several cases before the Ohio Supreme Court and the United States Supreme Court. In 2008 these efforts resulted in her receipt of the bipartisan John F. Kennedy Profile in Courage Award for public service. She is a graduate of Miami University of Ohio, cum laude, and Capital University Law School with honors. You can find out more about Judge Brunner at her campaign website https://www.judgebrunner.com.

Gretchen Bennett is the Director of Voter Protection for the Biden-Harris/Coordinated Campaign in Ohio. She is an attorney with 16 years of experience in election protection in battleground states including Pennsylvania, Michigan, and Florida. In Florida in 2018 she was one of two attorneys tapped to run the recount for the Democrats. In January 2020, Stacey Abrams’ organization Fair Fight Action provided resources to the Ohio Democratic Party to create a Voter Protection Department and to hire Gretchen as the Director. She served in that position until recently when she transitioned to the Biden Campaign. Gretchen has an A.B. from Harvard and a J.D. from Boston University. You can follow Gretchen on Twitter at @BennettGretchen.